Tickets from past dates will be honored

Gordon Lightfoot is celebrating his 80th birthday on tour. Celebrate with Gordon on July 18, 2021 in Chicago at the Copernicus Center.  The tour will feature his well-known hits as well as some deep album cuts for the die-hard fanatics. All of which are woven together with some of Lightfoot’s own behind the scenes stories and personal anecdotes about his historic 50-plus-years musical career and his 80 years of life. The event is sure to be a great thrill for live audiences and anyone who enjoys hearing great music and seeing a living legend in person. 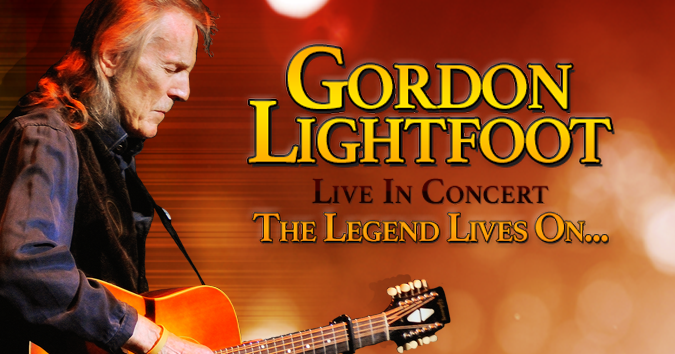 Lightfoot’s radio hits in the USA have earned Five #1s, Five Top 10s and Thirteen Top 40 hits. In Canada he has earned Sixteen #1s, Eighteen Top 10s and Twenty One Top 40 hits. His songs have been aired regularly for over 50 years, earning him Radio Singles Chart Positions in North America achieved by few others. Gordon Lightfoot has recorded 20 albums and has five Grammy nominations

In June of 2012 Lightfoot’s legacy was cemented when he was inducted into the Songwriters Hall Of Fame. Lightfoot was honored for his role in defining the folk-pop (pop-country) sound of the 1960s and ’70s. Aside from his success in writing, singing and performing his own songs, Lightfoot has found fortune in having his songs recorded and performed by other great artists including: Bob Dylan, Elvis Presley, Johnny Cash, Hank Williams, Jr., Marty Robbins, Jerry Lee Lewis, Judy Collins, Johnny Mathis, Anne Murray, Olivia Newton-John, Sarah McLachlan, Barbra Streisand, Peter Paul & Mary, Harry Belafonte, Jane’s Addiction, Richie Havens, Glen Campbell, Toby Keith and George Hamilton IV.

With all those performances, are there any songs that you find have taken on a different perspective than when you wrote them?
No, I think the thought has been consistent. I’ve been writing songs and imagining things that take place in my life and it’s more or less stayed consistent. The importance of some of these tunes, the topical songs like “The Wreck of the Edmund Fitzgerald” or “The Canadian Railroad Trilogy,” those have really proven to be important songs and the meaning I get from that, it means a whole lot to me sharing that with the world, and meeting a lot of people that have related in one way or another, to building a railroad across Canada or to shipping on the Great Lakes. It’s been an opportunity to meet with hundreds of people who in some way have identified with somebody or something that had to do with that unfortunate tragedy. We sing it all over the world. —  Read more of the Rolling Stone Interview from March 2019 HERE …

See images from his last concert at the Copernicus Center on September 16, 2018  –  CLICK HERE.

A documentary about his life, Gordon Lightfoot: If You Could Read My Mind, is currently playing in theaters in his native Canada, with a U.S. release pending.

Enjoy listening to The Wreck of the Edmund Fitzgerald from his 2018 concert at the Copernicus Center.