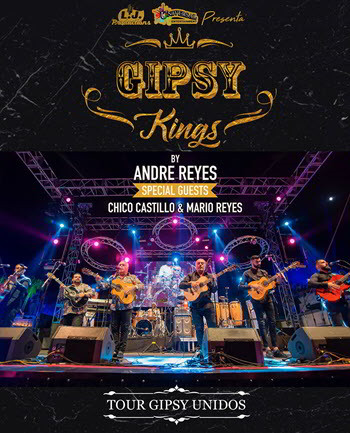 The Gipsy Kings have spent a remarkable two-and-a-half decades at the top in a category that’s all their own. The Kings play mixed genres of traditional Flamenco, Pop, Latin music, and flavors from international vast travels.

The Kings have recently produced their ninth studio album and the first new release in six years, the SAVOR FLAMENCO album. The project marks the first time in their career that they have produced themselves and written all of the material.

Over the years, the music of the Gypsy Kings incorporated elements of Latin and Cuban styles, Arabic music, reggae, and jazz guitar reminiscent of the French Gypsy master Django Reinhardt. Yet, as heard on the new album, they have never lost their intense connection to the traditional flamenco of their heritage, keeping a spotlight on Tonino Baliardo’s fluid guitar work and Nicolas Reyes’s powerful vocals.  Read more at THIS LINK.