Gino Vannelli is coming to Chicago!  Grammy nominated, singer-songwriter Gino Vannelli and his band will perform a live concert at the Copernicus Center on December 3, 2014.

. . . brought to you by V2 Concert Promotion 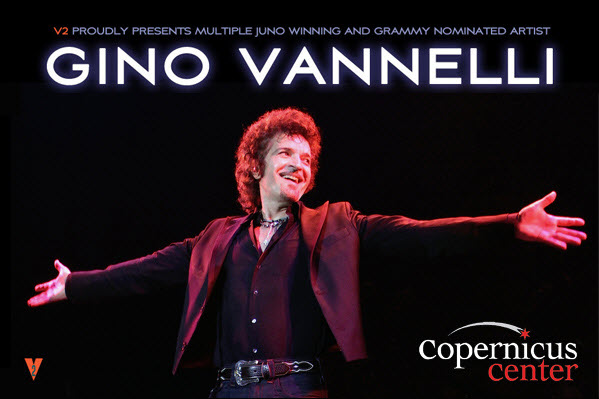 Grammy-nominated, singer-songwriter Gino Vannelli and his band are set to perform at the Copernicus Center. Renowned for his sensuous and soaring vocal performances, the V2 Concert Promotion is proud to welcome Gino Vannelli. This is a special event with Gino taking the stage with a seven-piece band performing Gino’s most memorial songs.

Gino has been touring the world from Japan to the Ukraine, Italy, Norway, Mexico, Canada, Holland just to name a few countries. With a new Live DVD concert special (Gino Vannelli – Live In LA) recorded in Los Angeles and currently airing on PBS stations throughout the US, Gino will be touring multiple cities in 2014.

Since Gino Vannelli’s debut release of Crazy Life, in 1973, Gino has remained one of the most distinctive voices in contemporary music. He is the recipient of multiple Canadian Juno awards, has been nominated for several Grammy Awards and has sold over 10 million records worldwide, with hits including “I Just Wanna Stop,” Living Inside Myself,” “People Gotta Move,” “The Wheels Of Life” “Black Cars “and many more.

Video:  From the new “Gino Vannelli Live in LA”  DVD