Featuring Los Panchos & Danny Rivera with Nelson Gonzalez.  This concert will bring together people of all ages to enjoy an evening of romantic songs from Latin America’s Golden Age of Music 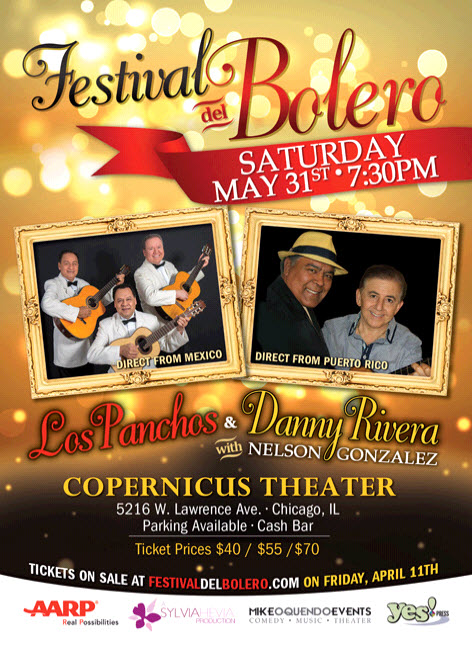 Los Panchos, regarded as one of Mexico’s top trios of all time and renowned for popularizing the “bolero”, has a continuing legacy that has grown throughout the years. What began in 1944 as a small musical
ensemble has now evolved into an iconic group recognized globally for their romantic harmonious vocal compositions that evoke feelings of love and nostalgia. This year mark’s their 70th Anniversary.

Danny Rivera, known as the national voice of Puerto Rico, is a singer/songwriter, whose career spans nearly 50 years. His magnificent, passionate way of singing is known and loved all over the
Spanish-speaking world. He’s recorded over seventy albums and is the only Puerto Rican to star at Carnegie Hall in four different decades (1979, 1989, 1999, 2010).

Danny Rivera and Nelson González have just finished work putting new life into the classical bolero by hitting the heart of the Latin American Song Book on the CD “Obsesión.”

Brought to you by:  Sylvia Hevia Productions & Mike Oquendo Events

Festival del Bolero will bring together people of all ages to enjoy an evening of romantic songs from Latin America’s Golden Age of Music.