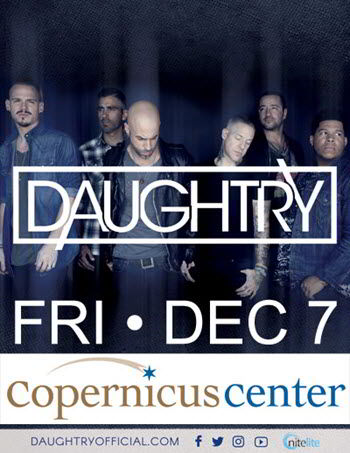 Grammy nominated and multi-platinum selling band Daughtry will be performing one concert in Chicago on Friday, December 7th.

“It takes a lot of time to accept who you are,” says Chris Daughtry. “You shave off the persona that you thought people expected, stop worrying about what anyone is going to think. You start to be comfortable with who you are onstage and off, and that all blends together. I think I finally know who I am as a person.”

As the frontman for the band bearing his name, Daughtry has become one of the most visible and consistent rock & roll torchbearers of the 21st Century. Since rising to prominence on the fifth season of American Idol, he has released four albums, all of which reached the Billboard Top Ten and have combined sales over 8 million copies in the U.S.

Daughtry’s self-titled debut was the best-selling album of 2007, which contained four Top Twenty hit singles including the Grammy-nominated smash “It’s Not Over.” Leave This Town also reached Number One in 2009, while 2011’s Break the Spell was certified gold. His group’s most recent record, 2013’s Baptized, featured the platinum-selling “Waiting for Superman,” which the singer points to as a turning point in his songwriting.

Opening up for Daughtry will be local rock group Friday Pilots Club, who recently won the Chicago leg of the Next2Rock national music discovery contest. For more on the group, visit https://www.fridaypilotsclub.com/.

Daughtry released their new single “Deep End” on June 6. The anthemic song is featured on the band’s 5th studio album Cage To Rattle, available now via 19 Recordings/RCA Records. For special fan club pre-sales and ticket information please visit www.daughtryofficial.com. For the newly announced dates in the US, every pair of tickets purchased online will include one physical CD copy of Cage To Rattle. Customers will receive an email with instructions on how to redeem their album.