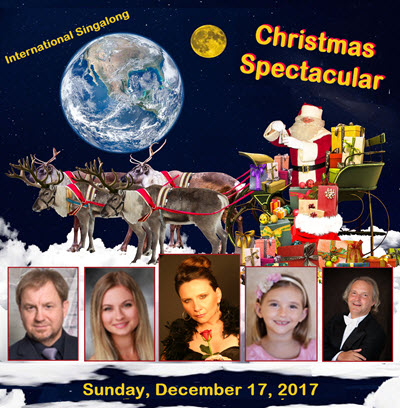 Enjoy and participate in a new sing-along adapted especially for this event of popular English, Polish and Czech Christmas Carols!

Excerpts from Handel’s Messiah (including the Hallelujah Chorus) with Czech diva Edita Randova!

Fun for the whole family with the orchestral debut of 6 year old vocalist Penelope Simmons!

Edita Randova is amongst the leading Czech mezzo-soprano singers, and an advocate for Czech music and culture around the globe. Critics have praised the range and tone of her voice, and her wide range of means of expression supported by excellent singing technique. Her vocal mentors are Milada Musilova, Eva Randova, and Marta Bohacova

Commencing her singing career in the Musical Theatre in Karlín and then the State Opera in Prague, Ms. Randova’s repertoire includes both Czech and international repertoire. She took part in a number of foreign tours of the State Opera of Prague, including to Japan and Switzerland. In 2000 she took part in a large concert tour throughout the Czech Republic bearing the title “Czech spring with Edita Randová.”

Ms. Randova has a long history of promoting Czech culture abroad. In 2003 she was invited by the Czech Ministry of Foreign Affairs to visit Australia, performing in the Czech Embassy in Canberra. In China she participated in a celebration of the National day of the Czech Republic, singing the national anthems of the Czech Republic and China. She was also part of a delegation to Beijing University, where she spoke about Czech culture. Two years ago, also as a guest of the Czech government, she had a tour of Brazil. Ms. Randova has also enjoyed sharing Czech culture and music in concerts and festivals in Austria, Great Britain, France, Spain, Portugal, Italy, Hungary, Germany, Slovenia, Slovakia, Norway, Mexico, USA (Carnegie Hall), and Canada.

An international award winner, in 2009, Ms. Randova was given the Gustav Mahler European Prize for her outstanding contribution to music, and she had her debut in Opera in Mexico as Maddalena in Verdi’s “The Rigoletto”. The next year she received prize “La Reconnaissance culturelle Medaile d´OR Internationale 2010”.

In addition to her opera work, Edita Randova also has a varied concert repertoire, including oratorios, cantatas, masses, song collections or individual songs by old masters, as well as contemporary compositions from leading international composers. She has cooperated with the Czech Radio, making several song cycles by Czech and world composers. Her recordings have been broadcast by radio stations in Italy, Australia, France and Argentina.  Learn more at Edita’s Website.

Justine Izewski is a fifth year Senior at U of I, double majoring in Vocal Performance and Choral Music Education. In September she was a soloist at the 200th anniversary of Kosciuszko’s death in the Copernicus Center. She sang “Wieją wciaż Wichry” by Michał Kleofas Ogiński followed by Rota by Feliks Nowowiejski. This past summer and the summer before that she traveled to Italy and studied at Prof. Stone’s Scuola Italia Opera program. In this program Justine had the opportunity to work with famous tenor Donald George in his Master Class. Her roles in the program included Zerlina from Don Giovanni (Zerlina’s Recitative, Vedrai carino aria, Sestetto, and the duet with Leporello), Cherubino from Le nozze di Figaro (Recitative leading into Voi che sapete, and the aria), Colombina from Pagliacci (La Commedia Act II), and Suzy from La Rondine (Scene I Act I). In the fall of 2016 she was casted in UIUC’s, Krannert of the Performing Art’s, production as “Virtue” in L’incoronazione di Poppea. In August of 2015, Justine was an invited guest at the Chicago Chopin Society Convention. She premiered a piece by Michał Kleofas Ogiński, “Wieją wciaż Wichry,” which follows the tune from the Polonaise Farewell (Pożegnanie Ojczyzny) by Ogiński. Also in 2015, Justine received coaching from Franc D’ambrosio, the world’s longest running Phantom from Phantom of the Opera on Broadway, and a former student of famous Tenor Luciano Pavarotti. After Justine finishes her undergraduate studies this year, she hopes to pursue a Master’s degree in Voice. Follow Justine on Instagram.

Penelope Simmons was born on the Big Island of Hawaii. She is six years old, and a first grader at Hanahauoli School in Honolulu. She began singing as a toddler, and is active performing with her father (accompanying on guitar) in the duo “Penelope and the Day.” They have appeared at schools, libraries, senior centers, and private events. Their repertoire includes Disney songs, Hawaiian music, Christmas selections, and popular standards.

An aspiring dancer, Penelope studies ballet at Hawaii State Ballet and hula at Hui ‘O Kamale. She recently participated in a runway walk with Storybook Entertainment, and was featured in their video “Like a Princess” when she was four years old. Penelope enjoys playing with dolls, swimming, drawing, and youtube.

Jaroslaw Golembiowski is President and Founder of the Chicago Chopin Society. The composer/pianist is one of the leading Polish-American musicians in the USA, recently receiving the Cultural Achievement Award 2017 from the American Council for Polish Culture. His music has been performed throughout North America and Europe, and he recently finished his fifth CD recording “Adorations,” with violinist Krzysztof Zimowski.

Founded in 2006, the Chicago Chopin Society is a nonprofit creating greater interest in Polish music and its significance in American culture. It actively supports composers, musicians, and arts organizations by presenting events that invite young and distinguished artists to perform. CCS has collaborated with countless Polish-American organizations, celebrating the anniversaries of Chopin (2010), Szymanowski (2012), Lutoslawski (2016), and Kosciuszko (2017). The Society is looking forward to its upcoming programming for the year of Anniversary of Polish Independence in 2018. Founded in 1997, American Music Festivals is a nonprofit promoting cultural exchange and American music. Its orchestral programming focuses on diversity, and its reach around the world has helped program concerts in Saint Petersburg, Prague, Sarajevo, Minsk, Varna, Belgrade, and Sendai.  Follow CSS on Facebook

Philip Simmons is Artistic Director of American Music Festivals. He has conducted in twenty one countries, performing in the Great Hall of the Tchaikovsky Conservatory, the Musikverein, Carnegie Hall, and Chicago’s Symphony Center. Music Director of the LCO and Resident Conductor of the Orchestra of the Hawaiian Islands, he is a passionate advocate for community and educational outreach, and making classical music relevant today.

Christmas Spectacular is part of the 2017-18 International Cultural Exchange Festival in Chicago presented by the Chicago Chopin Society and American Music Festivals.