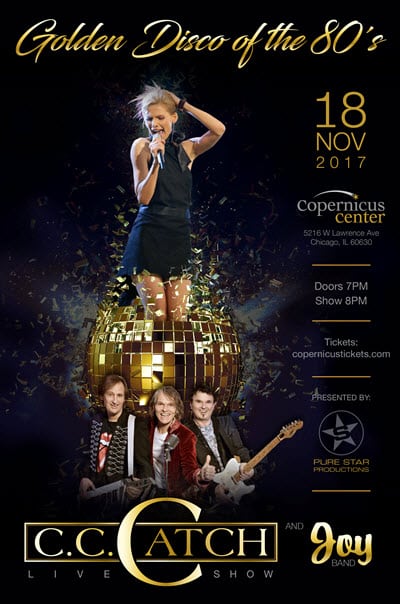 ↑ Buy here or at Polamer & DOMA

Golden Disco Night with Two Iconic Artists Under One Roof in Chicago!

Known for their greatest Euro – Pop music from the 80s, the queen of Disco C.C.Catch with biggest Hits :

I Can Lose My Heart Tonight , Jump in My Car , Heaven and Hell.. and “Joy” with biggest Hits like : Touch by Touch , Valerie , Japanese Girls  and many more, make history by coming to Chicago, for the first time together !!!

Born Caroline Catharina Müller in the Netherlands, she moved with her family to Germany in the late ’70s. In 1980, she became a member of the girl quartet Optimal, who issued two singles. During one of the band’s concerts in Hamburg, she was approached by songwriter/producer Dieter Bohlen who had just taken the continental charts by storm with his duo Modern Talking. She signed up with Bohlen who then changed her stage name to C.C. Catch, and the debut single of the newly christened singer — “I Can Lose My Heart Tonight” — was released in the summer of 1985.

Her collaboration with Bohlen lasted until 1989, resulted in four albums and 12 singles, and made C.C. Catch a queen of continental discos.

Austrian disco-trio Joy was formed in Bad Aussee, a town of 5.000 citizens.  JOY first single, “Lost In Hong Kong” brought them press mentions and was released in 1985.  Their next single “Touch By Touch”, composed by Schweitzer & Jaklitsch, was released in September 1985; it immediately reached European Top 20 Dance Charts.

The third JOY single, “Hello”, also became a hit. The first album – entitled simply “Hello” – spent five weeks on the first position in several charts. That brought world-wide popularity to the band, with their albums selling in more than 30 countries. Even a track that has not been released as a single, “Valerie”, became a hit it Eastern Europe: in USSR due to a flexi-single, released by “Krugozor” magazine, and in Hungary – due to a cover-version “Te meg en” from a local group “Inflagranty”.

The group has performed Europe wide through the years.  On July 1, 2011, JOY released a new album entitled “Enjoy”.