Unfortunately, this concert has been POSTPONED.  All tickets will be refunded & when rescheduled, patrons who purchased tickets will have a password exclusive presale. 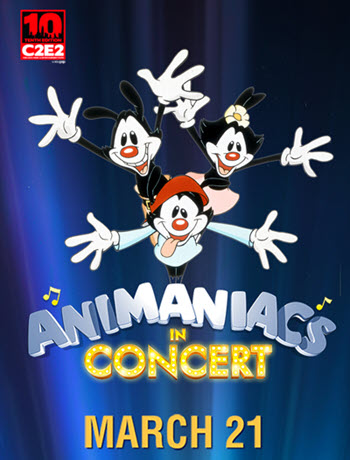 The most zany, animany and totally insany Animaniacs are back! Fans of the beloved Warner Bros. animated series, are in for a treat as they get up close and personal with their favorite characters as they perform songs from the pop-culture hit cartoon series – live on stage in the all-new Animaniacs In Concert!

The Animaniacs In Concert is a musical revue, starring the original voice-cast of the iconic animated series Animaniacs — Rob Paulsen (Yakko, Pinky, Dr. Scratchansniff), Jess Harnell (Wakko), and Maurice LaMarche (The Brain). Accompanied by Emmy Award-winning composer Randy Rogel, who created many of the memorable songs you STILL can’t remove from your brain pan, they bring the stage to life as the cartoon-quartet runs through an unforgettable playlist of Animaniacs hits.

These talented voice actors will also all be signing autographs, taking photos with fans, and taking the stage during panels at C2E2. Badges for C2E2 are on sale now at C2E2.com.