► This event has been cancelled ◄ 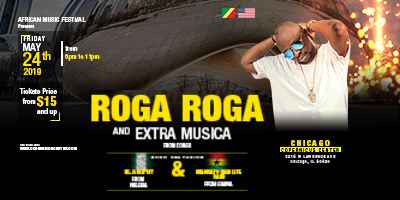 The African Music Festival in the USA is a premier initiative of the Honorary Consulate of the Republic of Congo in Chicago, Dr. Sylvere Malonga. The goal of this event is to promote AFRICAN:

For this year, we are displaying the talents and music of Roga Roga and Extra Musica band of Brazzaville in the Republic of Congo.

Extra Mmusica was created in 1993 in Brazzaville. It is the most recognized youth band in Brazzaville. They distinguished themselves by playing a unique music to the sound and mélodie of soukous, rumba and ndombolo.

In 1997 Extra musical was the best band at African Music Awards and in 2000 they earned the honor of best AFRICAN group at Kora Music Award. In 1996 they earned the Disque D’or in Paris, France. In addition, they were awarded the best group at the Ngomo festival in Kinshasa (DRC).

Extra Musica music is fun to listen and enjoyful  to watch. When they perform their dance is smooth and amazing.

In addition The African Music Festial is featuring Nyansapo Highlife Band from Ghana. These Ghanaian musicians have over 30 years’ experience and are considered to be the number one African band in Chicago. The name Nyansapo traditionally stands for “Wisdom Knot.” The band specializes in playing music from Ghana, South Africa, Nigeria, Cote D’Ivoire and many other African music styles.

Added to the show is Ik Adophy & De-Meritable Band from Nigeria. This genuine band of Negerians perform to the highest level. They have been named the best African entertainers in the Chicago area.

Come, live, witness the vibrations of African music. This is the show to not miss….

Honorary Consulate of the Republic of Congo in Chicago