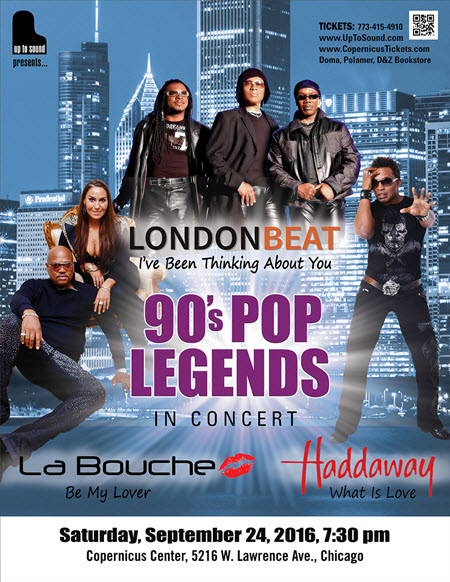 Three of the most renowned groups from Europe will perform under on roof on September 24, at the Copernicus Center.

Haddaway, Londonbeat and La Bouche, will bring the 90’s back to life with their iconic singles, which topped international music charts:

Three hours of live entertainment and the ultimate 90’s experience.  Don’t miss it.  IT WILL BE THE HOTTEST CONCERT OF THE YEAR!

Haddaway’s musical career started in 1993 with the dance hit “What Is Love”, which quickly became a standard popular request – and still is today – in every club, both here and abroad.
Twice winner of the Echo prize, and, with sales of 28 million, the owner of numerous platinum, gold and silver records, Haddaway is one of the pop music world’s global players. [Source: CoconutMusicGermany]

Londonbeat’s career started in the Netherlands where “There’s a Beat Going On” reached the Top 10, and then “9 A.M (The Comfort Zone)” which subsequently became a modest success in the United Kingdom. They are best known for their song “I’ve Been Thinking About You”, which hit Number 1 on the Billboard Hot 100 and the Hot Dance Music/Club Play charts in 1991, and for their close harmonies. Their follow-up single, “A Better Love”, became a Billboard Hot 100 Top 20 hit, and they returned to Number 1 on the dance chart with “Come Back” (Hot 100 #62). [Source: Wiki]

Lane McCray burst onto the international music scene in the mid and late 1990s with the late diva Melanie Thornton.  La Bouche (French for “the mouth”) conquered the dance music scene with chart toping singles and peaked at number one in seven countries while selling more than 10 million records. La Bouche earned numerous awards, including the German Grammy, the Echo, for Dance Song of the Year in 1995. In 2001, Melanie Thornton passed in plane crash.  Today, the original vocalist Sir Lane McCray carries on the dream. [Source: La Bouche]

Event Producer: Up To Sound