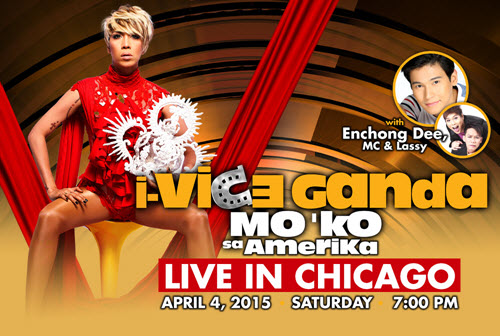 VICE is a Filipino comedian, host, actor and recording artist.  He is a regular host of ABS-CBN’s top rated comedy show “Showtime.”  In television, he is currently the host of his own Sunday comedy chat show “Gandang Gabi Vice”, featuring a wide array of guests from celebrities, athletes, online sensations, and even political figures. The show and its hilarious content also regularly appear on the worldwide Top 10 trending list of the social networking site Twitter, sometimes occupying more than half of the items on the list.

“The Phenomenal Box-Office Star”
In film, Vice Ganda started to act in supporting roles in movies such as In My Life and Hating Kapatid, opposite Filipino superstars Vilma Santos, Judy Ann Santos, and Sarah Geronimo. He landed his first leading role in the 2010 remake of the 1988 classic cult favorite Petrang Kabayo, which became a certified blockbuster. This spawned a series of other box-office winners such as The Unkabogable Praybeyt Benjamin, This Guy’s In Love With You Mare, Sisterakas, Girl, Boy, Bakla, Tomboy and The Amazing Praybeyt Benjamin – the highest grossing Filipino movie of all time, with a record-breaking revenue of more than 450-million pesos. Vice Ganda was also awarded Movie Actor of the Year by the Philippine Movie Press Club Star Awards for Movies for his outstanding portrayal of four different characters in the picture.

In music, he has unceasingly proven his knack in coming up with smash radio hits. With chart-topping singles like “Karakaraka,” “Whoops Kiri,” and the anthemic “Boom Panes,” Vice Ganda moved the nation to groove, as he whipped each song with whimsical choreography that are considered iconic dance crazes. No wonder his albums reached gold and platinum status, in which his third offering #Trending created another career milestone. It had been immediately sold out two hours after its release, turning the album into a gold record in less than a week’s time. And true to his early beginnings as a singer-comedian, Vice Ganda began penetrating the live concert scene in 2010 with his first major show May Nag-text… ‘Yung Totoo! Vice Ganda sa Araneta at the Smart Araneta Coliseum to a sold-out crowd. This was followed by two more successful concerts in the same venue: Eto Na… Vice Ganda Todong Sample sa Araneta and I-Vice Ganda Mo ‘Ko sa Araneta – the highest-earning concert staged by a local artist for 2013.  [source: viceganda.ph/me/bio]