One Hit Wonders of the 80s 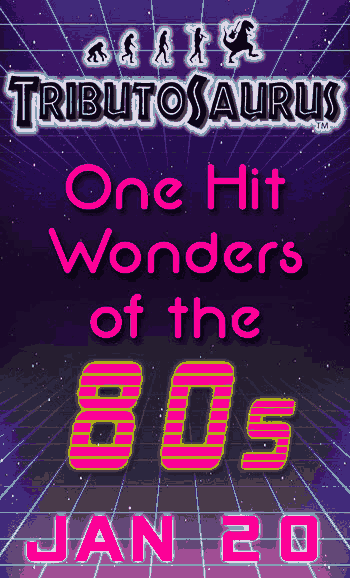 It’s not often that Tributosaurus breaks from their standard, trusted formula.  Since August of 2002 they have become one band, once each month.  When they do stray, it’s for something truly unique and special.

It’s time to bask in the greatest One Hit Wonders of the 1980’s.

On January 20th at the Copernicus Center, Tributosaurus puts on their musical leg warmers and headbands to revisit one of their most beloved and requested concerts.  It’ll be a full night of songs you know you’ll know.

There have been thousands of top 40 hits by bands and artists that never again approached the apex of the charts.  The 1980’s offers a tremendously diverse and eclectic batch of memorable flashes in the pan.  Quirky new wave, one-offs, iconic electronic dance pop, 45’s with German B sides, bands you’re convinced had more than just that one famous moment; all will be represented in the epic set list.  We’ll take you right back to the family couch, waiting for your favorite video to play on MTV in its heyday.

This will be a long show: a healthy 2 sets yielding over 3 hours of music.  As always, they’ll have every musician necessary to pay proper homage, including horns, strings, percussion, extra guitars, keyboards, and backing vocalists aplenty.  The star of the night is, as always, the music itself.