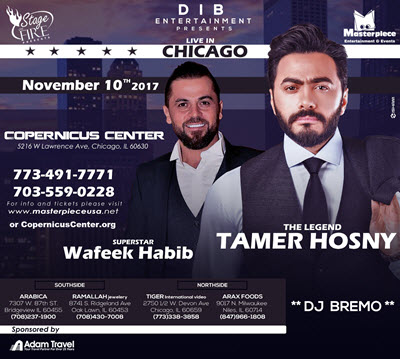 The legend Tamer Hosny is back to complete his USA tour that he started last year with four successful concerts feat the super star, Sean Paul. Tamer Hosny will be performing live in Copernicus Center for the Middle Eastern community in Chicago feat. The Syrian Super Star Wafeek Habib and the Lebanese singer Ahmed Hatoum. VIP tickets are available by calling 773-491-7771.

Tamer Hosny is a pop singer, actor, composer, lyricist, director, producer and novelist. His artistic career began in 2002. Extensive enthusiasm, hard work, and passion in terms of music and acting made him within 5 years the most promising celebrity/singer in the Middle East & Africa.

His albums and films (both past and present) have achieved best sells and wills. His masterpiece in music is magically amazing. His songs possess a strong convincing power, dominated deeply over mind and emotions from fans all over the world. His lyrics are remarkable, mainly surprising most of the time; as he introduces innovative phrases to make it simply unique and meaningful. His wide variety of audience members love his music, and support his record-breaking best sales.

As a movie actor, his acting is very spontaneous. He performs every challenging and diverse role in very realistic ways. Tamer enjoys writing his own movie scripts, utilizing his creative mind. His movies have achieved mostly ‘box office hit’ within the Middle East.  Learn more about Tamer on his FACEBOOK PAGE.

Wafik Habib can be found on Facebook at THIS LINK.