Tickets from former date will be honored 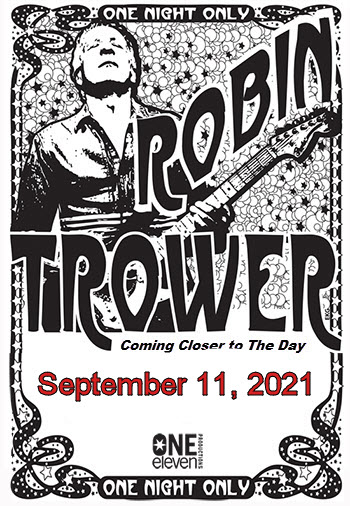 Join us for the Robin Trower Tour → Coming Closer to the Day. This concert is in Chicago for only ONE night on 11 September 2021.  Robin’s USA Tour follows the release of his new CD by the same name.

For Robin Trower, the next great song is always right there at his fingertips. For five decades, the iconic British bluesman has written the same way. The valves glow in his Marshall amplifier. Those fabled hands roam the neck of his Fender Stratocaster. Then the music starts to flow: raw and real, played with fire and skill, untainted by commercial aspirations, accompanied by lyrics that get to the guts of the matter.

“The songs always come when I’m playing the guitar,” explains Trower of his creative process. “Everything starts from there…”

So too began Trower’s latest studio album, Coming Closer To The Day. It’s rare to find a ’60s legend still on trailblazing form in their eight decade. But while Trower’s peers recycle the old hits or retreat from view, the 73-year-old guitarist finds himself in a golden late-bloom of creativity. In recent years, his solo output has been championed by both press and public, with the impact of 2014’s Something’s About To Change, 2016’s Where You Are Going To and 2017’s Time & Emotion setting up some of his best-attended US dates since he conquered that continent with Bridge Of Sighs in the mid-’70s.

“I had two really excellent tours in ’17 and ’18,” he reflects. “A really great turnout, great response from the crowd. It’s been wonderful, really.”

Acting on artistic instincts – rather than bowing to market forces – might not be a fashionable or profitable approach in the modern music industry. But in 2019, it’s a philosophy that is driving Trower’s late career to new creative heights, as the bluesman tightens his grip on the long-term fans who fell for his classic ’60s work, while reeling in younger music-lovers who crave something honest and unvarnished in the age of artifice.

Here’s a bit of insight into the Robin Trower Tour – Coming Closer to The Day:

“Diving Bell is probably my favorite track on the album,” he says. “That one went down really early, and it’s got that funky bluesy kinda thing that just hits me right where I live. Truth Or Lies, that one was quite hard to pull off. I love the song, but I recorded it once and wasn’t happy with it, so I started from scratch again. It’s got quite a strong early R&B flavour to it. That song is not really about me. I’m writing from the viewpoint of a guy whose loved one has been messing around – y’know, ‘I can’t make up my mind if it’s truth or lies’. Someone Of Great Renown, again, that song isn’t about me, but it’s maybe someone that I’d like to be. It sort of reminds me a bit of Hoochie Coochie Man, harks back to that Muddy Waters and Howlin’ Wolf kind of thing.

“Lonesome Road,” he continues, “that’s about me touring and asking how long I can go on with it. That’s definitely coming from my heart and head. Ghosts is about things from the past where you didn’t do right in your personal life. Don’t Ever Change is an out-and-out love song: a very nice, easy vibe, but still quite soulful.”  ….. Robin Trower

Listen to Trower’s latest studio album, Coming Closer To The Day at THIS LINK. 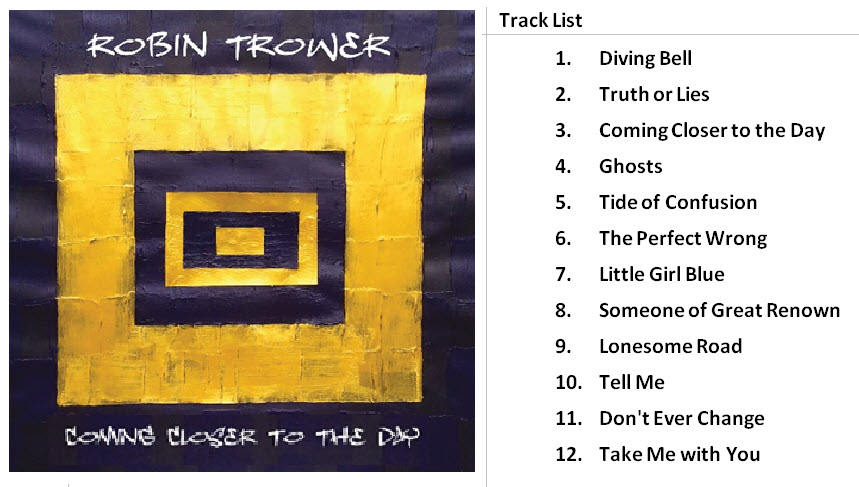