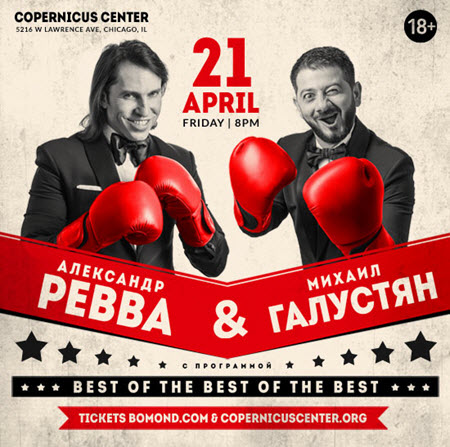 Bugz Entertainment presents Revva & Galustyan “Best of the Best of the Best.” This Russian Comedy team is in Chicago for only ONE show. Don’t miss the hysterical entertainment and laughter Revva Alexander and Mikhail Galustjan will bring..

Aleksandr Revva was born in Donetsk, Soviet Union. According to his own statement, announced in the program “Пока все дома” (While all in the houses), surname Revva artificial. His ancestors, who lived in Estonia and had name Erwa immigrated to Ukraine, where he changed his name to Revva. He graduated from the College of Industrial Automation, then the Faculty of Management of the Donetsk State University of Management. He worked as an electrical mechanic at the mine.

From 2006 to 2013 he was president of the Moscow «Comedy Club». in 2015 he returned to the television show. In «Comedy Club» acts with Timur Batrutdinov, Garik Martirosyan, Andrei Rozhkov and Garik Kharlamov and a single thumbnail.

With Andrey Rozhkov led the program NTV “You’re a funny!” Under the pseudonym Arthur Pirozhkov. December 25, 2010 the opening of the joint project of the restaurateur Dmitry Orlinsky and Aleksandr Revva – «Spaghetteria», has settled into a two-story house near Tver ulitsy. November 3, 2013 to January 26, 2014 led by the Channel One show “Repeat!”. On March 3 May 26, 2014 was one of the judges of the First TV channel “One to one!”. He is currently the producer of the animated series “Kolobanga”, which was withdrawn in Orsk, Orenburg Oblast. The series is scheduled for release by the end of 2014 on the channel STS.  [Source: Wikipedia]

Mikhail Galustyan was born on October 25, 1979, in the resort town of Sochi in southern Russia. Galusyan’s ethnology roots back to the city of Trabzon in modern Turkey, which used to be populated by a large Armenian community. His paternal grandfather, along with his 12 siblings escaped the Armenian Genocide during the early years of the 20th century and reached Sochi, what was a Black sea coastal town in the Russian Empire. Galustyan’s mother originates from Abkhazia. Being ethnically Armenian, Galustyan is of Hemshin origin, a branch of the Armenian genealogy originating from a diverse group of Armenians who in the past or present have been affiliated with the Hemşin district in the province of Rize, Turkey. When Galustyan was in kindergarten he participated in activities such as singing, dancing, and reciting poems. During his early life, Galustyan attended Sochi school, where he practiced the piano and began to hone his skills in a music class. He was also engaged in the puppet theater in the judo section at the Palace of Pioneers. After the fifth grade, Galustyan transferred schools at his parents’ instigation. At his new school he performed in a play on the stage. Galustyan’s role in the play was Winnie-the-Pooh. By the time Galustyan was in the 10th grade, he had joined his school’s KVN. Eventually, Galustyan became the captain of the school’s KVN team. His team went on to defeat all their opponent schools during the regionals and won in СГУТиКД (Sochi State University of Tourism and Resort Business).

In 1996, Galustyan graduated from school and went into medical school, where he had studied to be an “assistant-obstetrician”. After graduating from college, Galustyan entered the Sochi State University of Tourism and Resort Business with a focus in Social Pedagogy. In 1998, Galustyan joined his university’s “Start” KVN team and took part in the Voronezh League, in which he helped the team reach the finals. After the performances in Voronezh, the team received an invitation to the Highest League for KVN in Moscow from A. V. Maslyakov. Galustyan was eventually expelled from the institute for serious lapse in attendance as his group was on tour and were performing up to three shows per day.

In 2002, Galustyan became the leader of the team, “Baked by the sun”. In 2003, the team won that season’s championship. During this time, Galustyan also met his future wife, Victoria. And in 2004, “Burnt by the sun” won the KVN Summer cup and repeated this success in both 2005 and 2009.

In 2011, Mikhail became a student of the Kutafin Moscow State Law University.

Galustyan was a torchbearer for the 2014 Winter Olympics in his hometown of Sochi. He participated on the last day of the torch relay from Olympia to Sochi in what has been recognized as the largest and longest relay in the history of the Winter Olympics. Galustyan stated, “I’m proud and delighted that I helped my country and my hometown Sochi welcome the 22nd Winter Olympic games.”  [Source: Wikipedia]