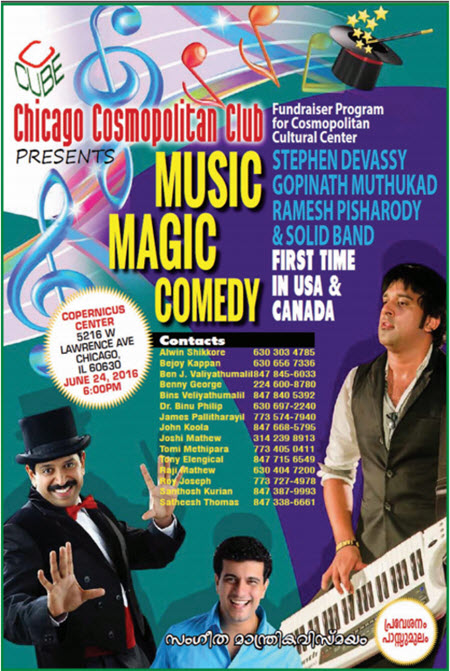 Music and Magic 2016 – stage show by Meril Award winning and world renowned Magician Gopinath Muthukad, world famous Musician Stephen Devassy and prominent comedian Ramesh Pisharody. This family event is hosted by Chicago Cosmopolitan Club and dedicated to the Keralite community of Chicagoland. Show time is approximately 4 hours including a break in between. Even though the show start time is 6 PM doors will open at 5 PM.

The combination of these uniquely talented artists is first time and based on an exceptionally narrated theme encompassing the strength of each key performer. While Stephen plays magic with Music, Muthukad brings in Illusion to the audience drawing a real Panoramic experience wrapped with the laughter by Pisharody. This is an exceptional theme and first of its kind targeting family audience of all ages.

Stephen Devassy is a Motif artist of Yamaha Synthesizer and educated in the famous Trinity College, London. He is a performer in the Rexband of Jesus Youth and performed in front of Pope John Paul II during world youth day in 2002 at Canada. 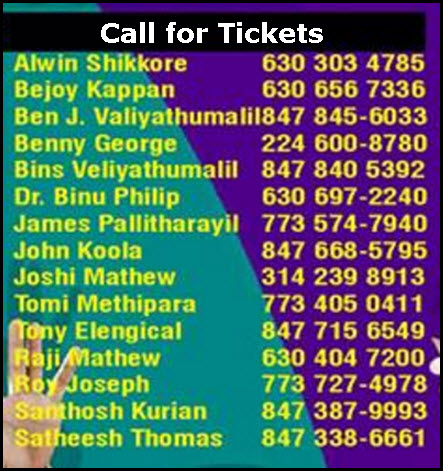 Gopinath Muthukad is a world famous Magician who won Meril Award. Meril award is considered as Oscar of Magicians worldwide. He has performed Illusions and exceptional escape acts receiving applauds from worldwide audience. Muthukad is also a famous Inspirational speaker and philanthropist. As a motivational speaker he hosts several shows in contemporary Malayalam TV and communicate through modern media to all age groups especially to kids. He is a Brand Ambassador of UNICEF and renowned worldwide for his movement for social well being.

Ramesh Pisharody is a famous sitcom comedian laughed the Malayalee with unparalleled humor. He appears in several TV shows as well as stage shows worldwide.

Music and Magic is definitely a family program this summer for Chicagoland residents to enjoy and cherish. This will leave a remarkable memory to the audience and is guaranteed you will enjoy every moment.