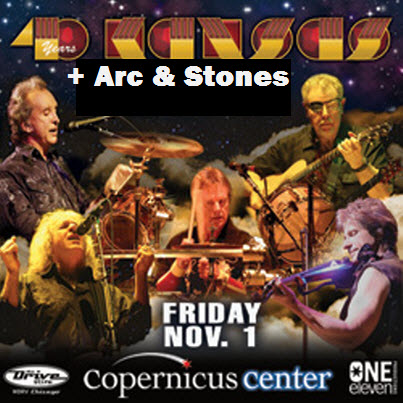 Kansas is an American progressive rock band that became popular in the 1970’s. After achieving many high ranking albums, they became VERY popular due to hit singles such as “Carry On Wayward Son“ and “Dust in the Wind.”

Kansas is beginning a new tour schedule of North America beginning in September.
Follow their tour of the US here.

Originally from Topeka, Kansas, the members are:

Some of their popular songs include:

About Arc & Stones From their FB page:  Having their sound described as a mix of alternative-rock, blues and soul, Arc & Stones deliver hard-hitting music from the heart. The band played their first show in September 2012 and has been making a name for themselves through New York City and as a national touring act.  “Arc & Stones EP” out now! Buy it on iTunes:  http://tinyurl.com/ajuyodq Coming to us from Brooklyn, NY, the members are: Dan Pellarin Ben Cramer Eddy Bayes Joey Doino We think you will like this sample of their music. . .

Brought to you by One Eleven Productions at:  http://oneelevenprod.com