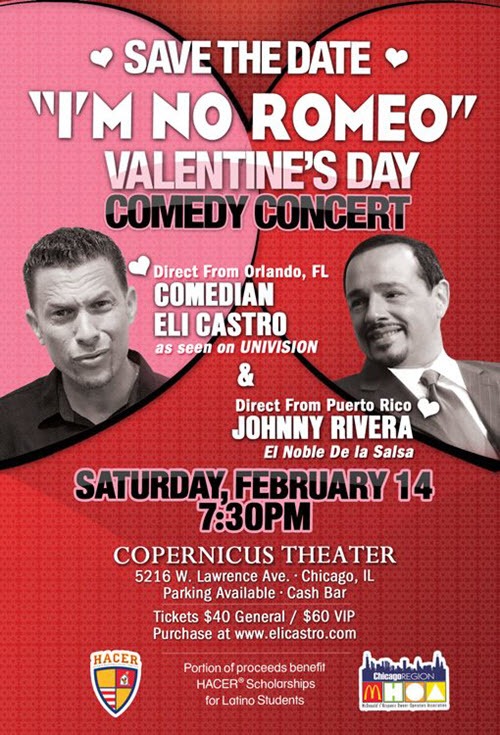 One of the most innovative comedians around, Elizardi Castro combines his Puerto Rican heritage with American culture to create a Spanglish riot of laughter and fun in all his shows. Born in Puerto Rico and raised in New York, this New Yorican comic has been blazing the stages and delighting audiences of all ages.

His animated and physical comedic style has made him an audience favorite everywhere he performs. His critically acclaimed shows have been reviewed and recommended by numerous publications including the Chicago Sun-Times and the Orlando Sentinel. His shows have also been featured on WGN-TV, Telemundo and Univision. He recently won “Best Stand Up” at the acclaimed United Solo Festival in NYC.

Elizardi’s performances have been seen in colleges and universities throughout the country, including St. Augustine College, Emerson College, University of Central Florida and Northwestern University Law School. He has also performed for various organizations and associations, including the U.S. Railroad Retirement Board, the U.S. Census and the Chicago Police Memorial Foundation.

Before following his dream to become a standup comedian, Elizardi worked as a prosecutor before running his own law firm where he worked as a criminal defense attorney. He is a licensed attorney in Florida, Illinois and New York. He also possesses a Master’s Degree in Communications, along with a Bachelor’s Degree in Psychology. However, Elizardi soon discovered that making people laugh was more rewarding than any paycheck he had ever received practicing law.  [source: http://www.elicastro.com/]