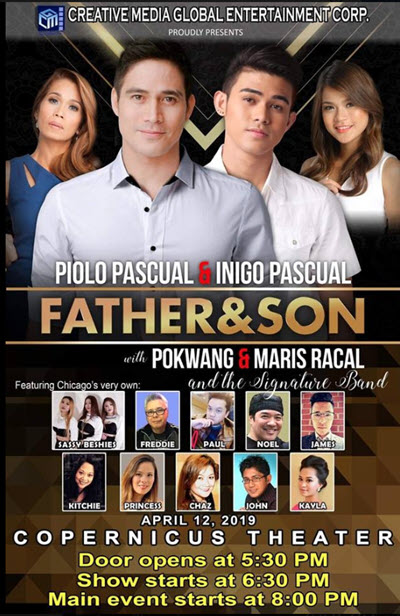 Father and Son, features the Philippine’s ultimate heartthrob, Piolo Pascual and his son, Inigo Pascual, also an actor and singer. Joining them on stage is comedian Pokwang and singer/actress Maris Racal for an unforgettable and exciting night of song, dance and comedy.

Piolo Pascual is a Filipino film and television muti-awarded actor, singer, model, and producer.  Pascual is a member of ABS-CBN’s  Star Magic.  Piolo Pascual is a Born-Again Evangelical Christian. In his personal testimony, he shared, “I was at the top of my career when I surrendered my life to God. So many things were happening to me at that time. I had just finished Dekada 70 where we won 10 awards. At the young age of 25, I was winning awards and earning millions already. I was working then with Donita Rose and she gave me a Bible. Donita told me to read the Bibleand that it will change my life.”

Iñigo Pascual is a Filipino singer, songwriter, and actor popularly known for his 2016 hit single, Dahil Sa’yo, the first number one song on Billboard Philippines’ then-new Philippine Top 20 chart . He is the son of actor Piolo Pascual.

Pokwang is a Filipino comedian, actress, television host and singer. She started in a reality show in ABS-CBN and subsequently appeared in dramas and sitcoms of the network. She also received the Best Comedy Actress award from the Philippine Movie Press Club for her portrayal in the sitcom Aalog-Alog and the Best Female Comedian award from People’s Choice Awards. She became a host of the variety shows Wowowee, Pilipinas Win na Win and Happy Yipee Yehey.

Maris Racal, is a Filipina actress, singer/songwriter and television personality who won 2nd Big Placer on Pinoy Big Brother (PBB) All In. She entered the PBB House at the age of 16 and was dubbed as the “Singing Sunshine ng Davao”. After her stint in PBB, Maris became a Star Magic artist. In February 2016, Maris was introduced as one of the members of all-girl dance group, Girltrends. On January 22, 2017, Maris was officially launched as one of the members of ASAP’s newest all-girl sing-and-dance group, BFF5.