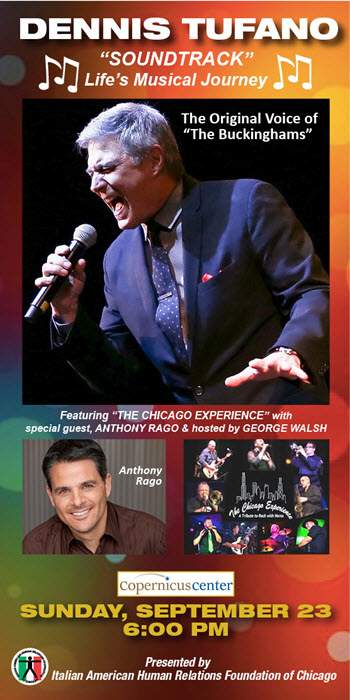 As lead singer of the 60’s pop group, The Buckinghams, Chicago-born and raised Dennis Tufano led the band through a string of the decade’s biggest hits including “Mercy Mercy Mercy,”  “Susan,” “Don’t You Care,” “Hey Baby, They’re Playing Our Song,” and the #1 smash “Kind of a Drag.“

After the Buckinghams disbanded in 1970, Dennis went on to have a successful career as both an actor and a singer-songwriter. In 1982, he toured with Olivia Newton-John and was featured on her HBO Special in two inspired duets. As an actor, Dennis appeared in theater productions and worked in film, television, radio and commercials. Currently, Dennis tours alongside many fellow 60’s artists, appearing around the world in classic rock shows, performing all the Buckingham’s chart toppers, plus his show-stopping personal tribute to Bobby Darin. Follow Dennis Tufano on Facebook.

Anthony Rago began his career in entertainment singing at family parties. Being that he has a large extended family of Italian relatives that meant an audience of 50-100 people. He is also an actor appearing in commercials, independent film, and “Chicago Fire.” You can still hear him sing at various events around town and you may have seen him as a commentator on ABC7’s telecast of Chicago’s Columbus Day Parade for the past three years.

The Chicago Experience  the nation’s premiere tribute to the legendary band “Chicago.” This nine member group dubs themselves the “rock and roll band with horns.” The Chicago Experience focuses a good portion of their setlist on the early years, especially Chicago’s first two records, 1969’s “Chicago Transit Authority” and the 1970 self-titled album, which features songs like “Beginnings,” “Questions 67 and 68” and “Does Anybody Really Know What Time It Is?”  Learn more about them at their:  Website & Facebook Page.

The Italian American Human Relations Foundation of Chicago was founded for the purpose of improving the civic, social and educational welfare of Italian-Americans as well as members of all ethnic groups. IAHRF believes that the arts are a natural forum for the transmission and display of cultural visions and a vehicle for opening people up to new ideas and feelings. The Foundation is committed to abolishing negative stereotyping of all ethnic and racial groups in the community as well as in the media.

Janet Davies, Co-Chair of this event, is a long time member of ABC7 news team.  She is the winner of 16 Emmy awards.  Janet is a long time entertainment reporter and the creator and host of 190 North, the longest running magazine show in Chicago.

Cheryl Tufano Crompton is our second Co-Chair and is a great friend to the Italian American community.  She is a life-long fan and sister to Dennis Tufano.

Joe Mantegna, is our IAHRF’s Celebrity Ambassador.  He is a long time film and TV performer.

The Copernicus Foundation is proud to provide underwriting through the use of the Copernicus Center facilities for this event.
Public Service Announcement