A Celebration of Symphony, Song, and Sing-along 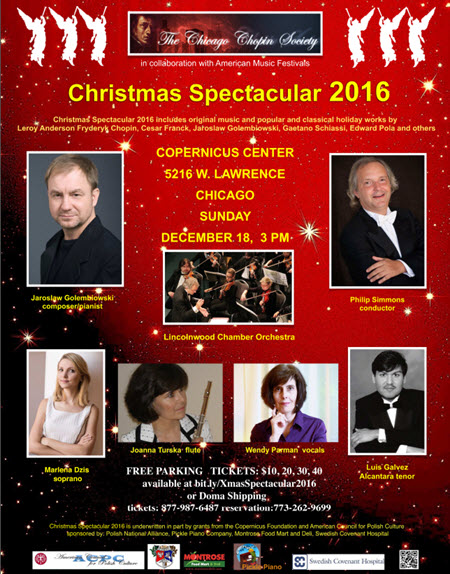 Enjoy traditional and new Christmas carols performed in English and Polish, and sing-along with a new medley adapted just for the Christmas Spectacular 2016 gala event!

“Reminiscing” with Jaroslaw Golembiowski at the piano 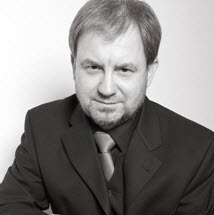 Composer Jaroslaw Golembiowski is the Founder and President of the Chicago Chopin Society, and one of the leading Polish-American musicians in the USA. He stands out among composers for his motivation: witnessing the joy emanating from the wonderful performers of his music, Adam Golka, May Phang, Penderecki String Quartet, Lincolnwood Chamber Orchestra, among others. His commissioned compositions capture the spirit of extraordinary events like the Battle of Vienna (Gloria for mixed choir-2004), and Warsaw Uprising (Zdrowaś Mario for soprano, piano or organ-1994). Others equally resonate with traditional (B.A.C.H. variations for piano solo, Sonata all Scarlatti for piano) and experimental forms and techniques (The Last 8:42 for magnetic tape) Op. 100 for piano-2004. His writing sometimes translates the passing of time into sounds (Music for Hours for piano-2011), and everyday life events into peaceful musical miniatures (Piano Games, 12 Preludes). Now after 40 years of creations he focuses on propagating his concert music in perfect venues for public sharing. Additionally he explores music preservation techniques in a variety of ways. . 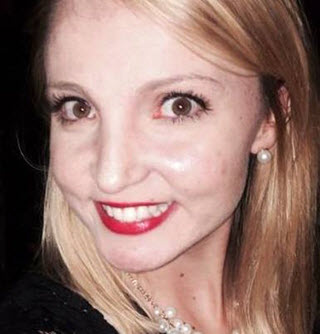 Marlena Dzis, Polish-born lyric coloratura soprano, has been hailed to have “an exquisite tone.” Having graduated magna cum laude from Loyola University New Orleans, Ms. Dzis continued on to obtain a master in music degree from Northwestern University. Ms. Dzis is currently a soloist with The Lira Singers and Orchestra, Christ Church in Palatine, IL, and the Chicago Choral Artists, with whom she was section leader in the 2015-2016 concert season. She has been collaborating with composer Jaroslaw Gołembiowski since 2014, with whom she has performed in both Chicago and Orchard Lake, Michigan. Ms. Dzis has appeared on The Lira Ensemble’s “Lutosławski” album, an ensemble with which she has performed in Detroit, Cleveland, Pittsburgh, and Chicago with both the Lira Symphony and Northbrook Symphony Orchestra. Ms. Dzis is currently coaching under the direction of Ken Smith.

Wendy Parman is a singer, songwriter and actor, performing in various 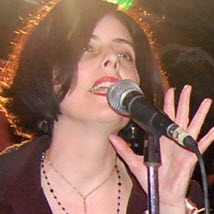 incarnations over the years in Chicago. Wendy’s voice has been called “mesmerizing,” bringing “elegance, humor, and depth of feeling” to her performances spanning a variety of genres, from jazz and musical theater to rock ‘n roll. She and Jaroslaw Golembiowski have collaborated many times and are currently working on recording their European cabaret project, “a tale a woes and could-it-be’s.” Wendy is also a voice teacher and this fall is launching a new humorous web series called, Callie’s Solo, based on her life as a singer/voice teacher.
Website ~ Facebook 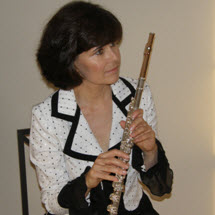 Flutist Joanna Turska received her Master’s Degree in Flute Performance from The Warsaw Academy of Music (currently the Chopin University School of Music). She continued her studies in the Netherlands and France. She was a first prize winner at the International Competition. “Premio Ancona” in Italy. Joanna performed extensively throughout Europe and appeared as a soloist at “Festival Estival” in Paris and “Warsaw Autumn” festival with the National Philharmonic Orchestra in Warsaw, Poland. In Chicago, she was a recipient of the Farwell Award and was featured on the Dame Myra Hess Concert Series. She has performed in concerts with Music of the Baroque, Chicago Baroque Ensemble, Chicago Chamber Orchestra, and Paderewski Symphony Orchestra. Joanna is a co-founder and an artist of the Landowska Harpsichord Society. She is a flute teacher and adjunct faculty member at the College of Lake County, Illinois. 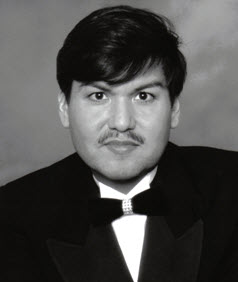 Luis Antonio Galvez-Alcantara, Director of Music and Liturgy at Immaculate Heart of Mary Church is a native of Lima, Peru, and Founder and Executive Director of North Shore Opera Hour. He is on the Voice Faculty at Sherwood Community Music School at Columbia College and is Piano and Voice instructor for the school, Piano Lessons In Your Home. In 2013 Luis received the Peruvian Tumi Award. He is a graduate of The Chicago College of Performing Arts and completed the Chicago Series in Liturgical Music at St. Joseph’s College in Rensellear, Indiana. His performances include; Alfredo in La Traviata, Don Jose in Carmen, Rodolfo in La Boheme, Pinkerton in Madama Butterfly, Alfred in Die Fledermaus, Mozart’s C-Minor Mass, Bach’s Cantata 66, Dubois’ The Seven Last Words of Christ, and Schubert’s Intende Voci Orationis sung from California to New York and abroad. Since the beginnings of his career as church organist and choir director at the age of 10, Mr. Galvez-Alcantara has devoted his life to promoting his Peruvian heritage in music and song and as a mentor and teacher to young aspiring musicians. 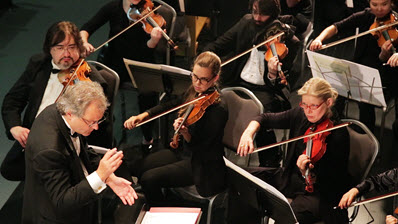 The Lincolnwood Chamber Orchestra has been performing for over 25 years, and appears regularly at the Copernicus Center.  Comprised of some of Chicago’s finest freelance musicians, it is flexible in its repertoire and composition, enabling it to participate in a wide range of programing and community outreach.  The LCO was named “Chamber Ensemble of the Year 2000” by the Illinois Council of Orchestras, and has been acknowledged by Chicago Mayors Richard Daley and Rahm Emanuel, Vice President Joseph Biden, and foreign Consulates in Chicago for its music making and programs of cultural exchange.  Highlights of the orchestra’s history include performances at Chicago’s Harris Theater, North Shore Center for the Performing Arts, Chicago Cultural Center, Illinois Holocaust Museum and Education Center, Chicago Islamic College, numerous concerts in collaboration with the Village of Lincolnwood, and the recent Sir Georg Solti Memorial Festival at the Copernicus Center.  Renowned artists who have appeared as soloist with the LCO include William Warfield, Lukas Foss, Albert Igolnikov, John Bruce Yeh, Charles Pikler, Wendy Warner, and David Schrader.  Facebook  [see video at bottom of page]

Philip Simmons is the Artistic Director of American Music Festivals.  He has conducted in twenty countries, performing at Carnegie Hall, Chicago Symphony Center, the Musikverein, Saint Petersburg’s Philharmonic Hall, and the Great Hall of the Tchaikovsky Conservatory.  Mr. Simmons is the Founder and Music Director of the Lincolnwood Chamber Orchestra, and Resident Conductor of the Orchestra of the Hawaiian Islands.  He has conducted dozens of concerts at the Copernicus Center, including performances with the LCO (including the Sir Georg Solti Memorial Festival in April, 2016), the Lake Shore Symphony, and on the Chicago Summer Silent Film Festival.  Previously he was Associate Conductor of the Saint Petersburg Camerata (Hermitage Theater) and Principal Guest Conduct of the Sochi (Russia) Chamber Orchestra.

Frederick Chopin is regarded as one of the greatest influences that pulsated beauty, life and triumph into the Polish people. Known as the poet of the piano, he put into notes that which could not be expressed into words: the sentiments of a great nation recounted graciously by a grand soul. Chopin remains a constant source of pride and inspiration for Poles around the globe, from Warsaw to Chicago.

It is this very inspiration that led acclaimed Polish composer Jarosław Gołembiowski to pursue establishing a venue in which Polish musicians could be celebrated and given a chance to build blossoming careers.  A graduate of the Karol Lipinski Academy of Music in Wroclaw, and Frederik Chopin Music University in Warsaw, Poland, Gołembiowski founded the Chicago Chopin Society, an organization with a mission to actively support and promote Polish composers, artists, and artistic organizations. Now celebrating over a decade, the Chicago Chopin Society has already left its mark on the Chicago, with years of beautifully dignified concerts and festivals.  Website  ~  Facebook  [see video below]

American Music Festivals is a nonprofit committed to cultural exchange through orchestral programming.  Its mission is accomplished in Chicago by concerts of the Lincolnwood Chamber Orchestra.  These programs are often presented in collaboration with other performing and civic organizations.  American Music Festivals also presents the Orchestra of the Hawaiian Islands (Honolulu), and since 1997 has been partnering with diverse cultural institutions around the world.  Website