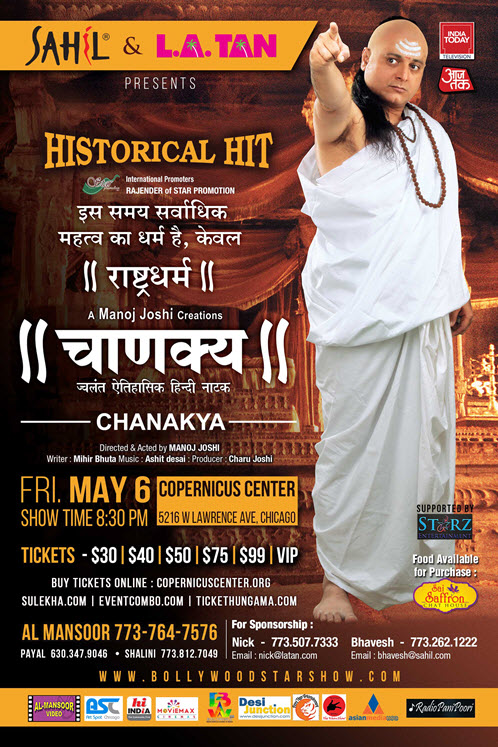 One play you do not want to miss! Chanakya, the greatest statesman, a political strategist is the one who created a nation out of squabbling kingdoms, will never be born again, but his thoughts are arguably even more relevant to say so than in his time… the resonance of his thoughts reach us from the distance and till date inspire us. What was his thirst for? Kingdom? Power? Comforts? Wealth? Was he the miscreant content only in senseless violence? If he had any of these desires, than he would not have inspired so many generations.

He was a rare melange of supreme intellect, insightful dreams and audacious sincerity towards the heartfelt cause. And his cause was to create a strong, unified and prosperous great nation named BHAARAT.

Chanakya’s sincerity & knowledge gave him the dominion over one and all which transformed people into protagonists.

Chandragupt started as a timid prey and ended being the greatest sovereign of history due to Chanakya’s strong influence. Chandragupt ended the cruel and selfish rule of Nandas and established the eminent Mauryan clan under the guidance of Chanakya.

Chanakya was one such person who could correctly interpret the past and envisage the future to decide the right course for the present.

The internal discord, the external threat, the polluted politics and the despicable corruption of public servants. Was this the scenario in the time of Chanakya? Or, are these the headlines of today’s newspaper? The fabric of this once magnificent society is being corroded from within and outside. Only the austere and serious adherence of Chanakya’s thoughts and concepts can restore this society to its previous glory. –

We, the people of India, love to sing extols to self. But there are numerous ailments with which we are inflicted and we are completely oblivious to our spiritual health. This nation certainly touched the summits in distant antiquity but throughout the past millennia we have only achieved decay. The decay of morality, social consciousness and predilection for community. This society needs to be stretched and shuddered so that it can rouse from the centuries’ old slumber. We need to contemplate Chanakya’s work today. We need a leader akin to Chanakya today.

The play is our modest attempt to read those glorious pages from the past. Our endeavor is to present an opportunity for introspection towards the society and the leaders of the society. To proclaim that the Nation is supreme and selfless love for the nation is the only virtuous selfishness. Family, Friends and Fortune, all are secondary.

We praise that celestial soul known as Kautilya Chanakya and will try to bring his divine work to the citizens of India. – See more at THIS LINK.