► CANCELLED (ALL purchased tickets will be REFUNDED & reflected in Card statement) 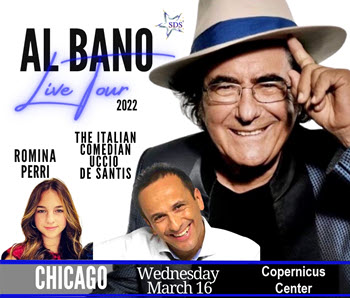 Once again the beloved and most famous Italian singer Albano Carrisi returns to America to meet the whole Italian American community in the USA. Fans will listen to their favorite songs and enjoy what all those lovers of Italian music yearn to hear again.

The singer Albano Carrisi, better known as Al Bano, was born on this day in 1943 in Cellino San Marco, a town in Puglia about 30km (19 miles) from Lecce.

He enjoyed considerable success as a solo artist in the late 1960s but became more famous still in Italy and across mainland Europe for his collaboration with the American singer Romina Power – daughter of the actor Tyrone Power.

They met during the shooting of a film – one of several, mainly romantic comedies and a vehicle for his songs, in which he starred during the 1970s.

They not only formed a professional partnership but were married for almost 30 years. They twice performed as Italy’s entry for the Eurovision Song Contest, finishing seventh on both occasions, and appeared several times at Italy’s prestigious Sanremo Music Festival, winning the top prize in 1984.

They divorced in 1999 but re-united on a professional basis in 2013 and when they performed at the Arena di Verona in 2015 before a sell-out crowd of 11,000 the show was broadcast by the Italian TV network Rai and shown in seven other countries, with a combined audience estimated at 51 million.

Carrisi’s total record sales as Al Bano are said to be in the region of 165 million, mainly in Italy, Austria, France, Spain, Romania and Germany.

When he was born during the Second World War, his mother, Iolanda Ottino, named him Albano because at the time his father Carmelo Carrisi was fighting in Albania for the Royal Italian Army.

The name established a link with the country that remained with him. In 2016 he was awarded Albanian citizenship.

He made his debut as a singer in 1966 and won the Disco per l’Estate, an Italian song contest, with Pensando a te in 1968. More hits followed. His song, Nel sole, sold more than a million copies.

His musical collaboration with Romina Power began soon afterwards and would last for almost 30 years. They took part in the Eurovision Song Contest in 1976 in The Hague with the song We’ll Live It All Again (Noi lo rivivremo di nuovo), which finished seventh behind winners The Brotherhood of Man, from the UK.

They returned in 1985 in Gothenburg with Magic Oh Magic, which also finished seventh. The contest was won by the Norwegian duo Bobbysocks.

They entered Sanremo five times and won first prize in 1984 with Ci sarà.

Following their breakthrough hit Sharazan in 1981, which reached number two in the Italian charts, they had two number ones with Felicità (1982) and Ci sarà. Their commercial success continued well into the 1990s, with many records selling in Spain, Germany and Austria.

Al Bano returned to his solo career in 1996 and to Eurovision in 2000, providing backing vocals for the Swiss entry (performed in Italian) La vita cos’è? by Jane Bogaert. After starring with his daughter Romina Carrisi in the 2005 edition of the Italian reality show L’isola dei Famosi – an equivalent of I’m a Celebrity, Get Me Out of Here and Celebrity Survivor – he entered Sanremo in his own right in 2007, finishing second will Nel perdono.

Although he has made his name in the pop world, Carrisi’s tenor voice is of such quality that he is comfortable singing opera, which was his passion growing up. He released an album of operatic arias in 1997 and once performed alongside Placido Domingo and José Carreras as a stand-in for Luciano Pavarotti.

Even at the age of 74, Carrisi still tours and remains is a familiar face on Italian television. He had heart surgery in December 2016 and was admitted to hospital in March this year following a scare but returned to work after a brief rest, insisting he did not want to disappoint his fans.  This “bio” section is sourced from: https://en.wikipedia.org/wiki/Albano_Carrisi